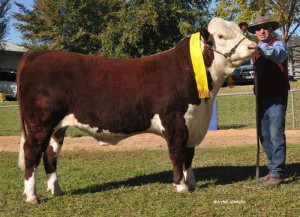 The Herefords National Show & Sale committee introduced the Breedplan-linked triple A system at this year’s event to lift catalogue quality.

To achieve a triple A, a bull must have a 600-day weight and scrotal in the top 50 per cent of the breed, milk and birthweight in the top 75pc, and eye muscle area and intramuscular fat percentage in the highest 20pc.

The bull’s birthweight EBV must be no more than 10pc of the 400-day weight EBV.

The Bull created plenty of interest in the National sale, with the Pearce family, Yavenvale Herefords, Adelong, NSW, securing him for $14,000.

Mr Morgan said Hillard’s 400-day weight EBV was 13 times the birthweight. The bull’s raw scan of a 126sqcm eye muscle area placed him in the top 1pc of the breed.

Hillard also scanned 13mm on the rump, 8mm on the rib, and a scrotal circumference of 37cm and was a frame eight.

Allan and his wife Heather join 450 registered cows on their 1340ha property. They sell bulls to commercial clients from Queensland to Victoria’s Gippsland region.